On Nov. 13, members of the Rotary Club of Pell City remembered a dear friend. 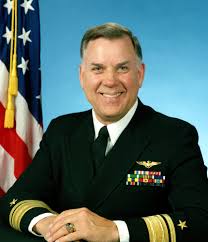 Adm. Dennis Brooks, who passed away in the late evening the day before, as the rest of the country observed Veterans Day, was constant in our Club. He was one of the men and women whose efforts to build and maintain it were not lost on the others in the room. Brooks’ close friend, Judge Bill Hereford, reminded those in attendance that one of the greatest loves of Brooks’ life – right behind his family and the US Navy – was Rotary.

Brooks was a man of unending character. His presence was a motivator, and his demeanor rarely swayed from limitless positivity. Members remembered him as a humble man, despite his life being something from a novel. He was a man made of stories, all of them unbelievable in many ways, but you believed every word due to the source. He was charismatic and fascinating, yet overly approachable, warm and welcoming. His deep voice could rattle you if he wanted. I never did though. You believed it when he gave you praise.

Many in the room had been to Admiral Brooks’ home to share a meal with he and his wife, Lorrie. They remembered him as though he’d yet to leave. As he was often ready with a story from his days at sea it seemed that at any moment he’d take the mic and tell us all. It was quickly obvious none of us could fill the void. Or will fill it in the future, for that matter.

As a Club, we remember Admiral Dennis Brooks as our former District Governor, a sailor who sought to make a difference in our community alongside his crew in Rotary. As individuals though, we cant help but enjoy the time we had living in the wake of a man who was bigger than all of us – but always made us feel the opposite.

Adm. Dennis Brooks’ relaxed, cordial attitude and genial disposition allows but a glimpse of the high-powered man who rose steadily through the U.S. Navy to be first Commander, Joint Task Force, Middle East. But that man is quite evident when you observe his enthusiasm and dedication to causes in his state and his community.

“You might not know it this minute,” his wife, Lorrie, says, “but he thrives on stress!”

Rear Admiral Dennis M. Brooks’s title reads USN, Retired, but he hasn’t taken the word to heart. He has merely changed venues of service, exchanged one passion for another.

“I had a passion for the Navy,” he said. “Now I have a passion for Rotary.” Admiral Brooks travels the state as 2006-2007 Rotary District Governor for District 6860, North and Central Alabama – one of many posts he has held in the world’s first and largest service organization.

He equates two standards of conduct, the laws set forth in The United States Constitution, and the universal Rotary standard of behavior, the Four-Way Test. Both, he says, are standards that transcend borders and generations, are not based on culture or religion, are both beautifully crafted and easy to understand. Both have captured his imagination and his allegiance.

The boy, Dennis Brooks, grew up in Fairfield, AL, and attended Fairfield High School, as did his lovely wife, Lorrie. After graduation from the United States Naval Academy (USNA) in 1957, he married University of Alabama student, Lorrie (UA, ’60), and began a notable 35 year career and 60-year loving marriage. 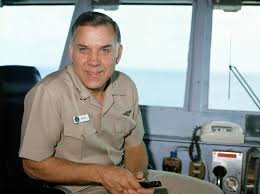 His military accomplishments are legion. He served as naval officer, fighter pilot (logging 990 carrier landings), test pilot, USNA academic faculty member, commander of two navy fighter squadrons. He commanded the USS Kansas City (AOR-3), and USS Constellation (CV-64). He was Commander, Battle Force, and Commander, Carrier Strike Force, of the U.S. Seventh Fleet, and in 1987-88, he was the first commander of Joint Task Force, Middle East, commanding all U.S. Forces in the Persian Gulf region, conducting combat and other operations in support of national policy. At retirement, he was Deputy Director, Operations, National Systems Support for the Joint Chiefs of Staff, and Deputy Director, Military Support, National Reconnaissance Office, Pentagon. 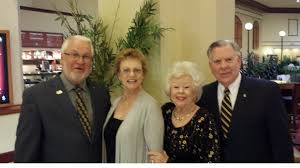 They have three children, Dennis Mark, Amy Michelle Miller and Allison Lynn Middlebrook. Mark has followed his father’s path and is a Navy Commander, selected for Captain. Allison and Amy live in Anniston, near Pell City where Dennis and Lorrie retired in 1992, drawn “back home” by roots and family. They enjoy the area, driving through Alabama together, and visiting Rotary Clubs in the district. Both are delighted to be near their two grandchildren. As always, Lorrie is integral in Dennis’s activities and is his most supportive fan.

In service to their community, Dennis has been president and chairman of the board of Pell City’s Habitat for Humanity, elder of the First Presbyterian Church, Talladega, is on the board of the Eastern Health Foundation, was director, Choccolocco/Greater Alabama Council of the Boy Scouts of America. Lorrie is active in their community, and has been president of The Armed Forces Officers Wives Club of the central Alabama region.